This past meeting we all travelled (in our imaginations) to Costa Rica as Mark E shared his experiences and stories of this Central American country with us.

Linda T was our guide in Table Topics. We found out from Manshu A why we should go to Costa Rica (the answer is “because Nicaragua doesn’t sound as nice”.) Indre F then shared with us how she tortured her future husband by forcing him to walk two hour across Rome. Natalie M convinced us of the advantages of speaking Spanish in Paris (it turns out to be slightly more useful than speaking Mandarin in Paris). And finally, Mr. and Mrs. E entertained us with the traditional Costa Rican marriage whistle song.

Speaking from the advanced manual “Special Occasions” with speech number 1 “The Toast”, Amy G led the club in a tribute to Ted Geisel in a speech entitled “Commemorating Dr. Seuss.” Cynthia P then informed us with speech number 6, Vocal Variety, entitled “FIRST Robotics”. (Cynthia, thank you for introducing the word “coopertition” to my vocabulary.) For more information on FIRST Robotics, visit http://www.usfirst.org/ or http://www.sandiegoregional.com/ . The prepared speeches were rounded out with Mike R giving speech #4 from the Persuasive Speaking manual with “Article 5 of the Constitution: A Solution as Big as the Problem”.

Reminder again that dues are due. Please bring your $63 payment to Jerry M at the next meeting.

This week Felicia D led us on an on-going mission to the Star Trek universe. We visited strange new worlds, sought out new life and new civilizations, and boldly went where no one has gone before.

John W gathered his away team for a visit to Table Topics. (“Dammit, Jim! I’m a President, not a Topics Master.”) Jan C bewitched us all with her tale of the holodeck. Terry H discussed the downside of transporters. Our guest, Indre, shared with us how she would keep the food replicators busy making berries. Julia S made use of the advanced 23rd century medical tricorders to discover why her cat was gaining weight. Amy G analyzed machines to determine if they were intelligent and self-aware. Jerry M used his magnetic personality to explain how in the future we will cope without pockets. Fascinating!

Kara D then shared with us from the Storytelling manual speech number three, “The Moral of the Story” with a speech entitled “Getting Yourself to Share”. Kara’s speech managed to share, and teach, and entertain (and for those of you who haven’t heard it, Kara has a lovely voice).

One more reminder, the Area 12 speech contest is tonight, Friday, March 06, at 6:00 p.m. at the CalTrans offices at 4050 Taylor Street in the Garcia Room 1-125. See the attached flyer for more information. Show up to cheer Mike R and Mark I as they represent Voyagers.

Away team, our work here is done. Beam us up, Scotty.

See you next Thursday,

Come Sherman, and let us use the Wayback machine to experience Linda T as Toastmaster with the theme of “1975: Then and Now”.

It was a time when The Captain & Tenille knew “Love Will Keep Us Together” and Glen Campbell was a “Rhinestone Cowboy”. A young director named Steven Spielberg kept vacationers out of the water with his movie “Jaws” while the cast of Monty Python went searching for the Holy Grail. If you wanted to be fashionable, you were wearing bell-bottoms or made sure you had grown sideburns.

Donna G conducted us through 1975 with a wide variety of table topics. Nancy J reminisced about finishing up grad school and how not to be fashionable. Amy G wished for the return of “Family Hour” television introduced by the major networks back in 1975. Julia S shared how she watched TV and what she watched (giving her a chance to bring up Gilmore Girls again). And finally, guest Steve C was forced to choose among the 1975 TV series Ghostbusters, the 1984 movie Ghostbusters, or the newly announced remake of Ghostbusters.

For prepared speeches, Mark I prepared for the Area 12 International Speech contest next week with “A Pilot’s Pilot”, the story of Robert ‘Bob’ Hoover and dealing with people. Megan S  spoke next giving basic manual speech #2 Organize Your Speech, entitled “Social Media Savvy or How You Can Engage with the Facebook Page.” And to wrap things up, Jerry M shared the work of American poet Paul Laurence Dunbar while covering speech #2: Interpreting Poetry from the advanced manual Interpretive Reading.

Quote of the Week: “You started with a genuine compliment and I think that was really nice. I think that when you do that, then the person who’s being evaluated is more open to whatever you’re going to say next, so you can really slam them.” (Just kidding!)

Once again, I will make an appeal to the club to bring in items for the Opportunity Drawing at the Area 12 speech contest next week. These donations help defray the cost of the contest and raises money to send the winners on to the Division and District contests. (That last sentence felt like the first two seasons of the TV show “Glee” where all they talked about was making it to Regionals. Or at least it felt like the “Community” parody of “Glee”.)

For next week, dust off your tricorders, phasers, and pointed ears as Felicia D leads us with the theme of “Live Long and Prosper”.

See you on Thursday, 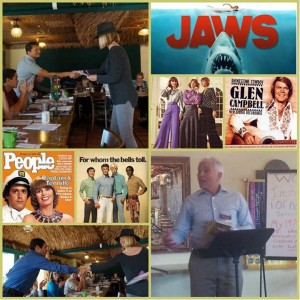